A Letter of Appreciation

The Board of Directors of the nonprofit public benefit organization “Radio Club TU – Gabrovo”, on behalf its members, would like to express its sincere gratitude to the members of the Chinese Radio Club Guangdong Genesis Youth Radio Club Mr. Lee, Mr. She and Mrs. Chikuam for the gratuitous provision of face masks to all the members for protection during the COVID-19 epidemic.
The masks were delivered with the substantial help of the Chairman of BFRA Mr. Victor Tsenkov LZ3NN who has been sending the masks on his own cost.
Once again,
Dear colleagues and friends,
We are deeply grateful to you for helping us during this crisis moment of pandemic.
May all the health, luck and success be with you and your noble endeavors!
Best regards,
Chairman of the Board
Iliya Nedelchev LZ2IVN

On 02.04.2016 (Saturday) around 13:00. a team led by LZ2JR and consist of: LZ2RS, LZ2ISI and LZ2VAK, wend to Uzana locality.
Traditionally, the host for our participation in the tournament will be hut "Partizanska pesen" (QTH locator - KN22OS).
The team arrived around 14:00. In the hut where he had to perform dismantling of Spider Beam antenna used by LZ2JR and LZ2RS for the competition Russian DX Contest and to mount the antenna Inv-V range of 7 MHz instead.
Among the nature in the wonderful spring weather, the team's work was going smoothly. The Spider Beam antenna was disassembled and immediately began preparing Inv-V.
The hosts were a good company and kindly helped while the team worked on preparing and raising the antenna. Guests of the lodge, often stopping their eyes on what has been done.
The team raised the antenna and make measurements with antenna analyzer. It was found that adjustment in the arms is required because the resonance of the antenna is about 6950 kHz. After multiple adjustments in the length of the arms, the resonant frequency of the antenna is received in the middle of the SSB division.
The arms of the antenna were fixed good, the buckles of the mast too, and this finnished the tasks for the day. The work ended around 18:00.
All are hoping the radio club to be successful with this antenna at local connections during the tournament.
Next Saturday should be mounted transceiver, power amplifier, computer Contest Log software.
Regards, hopefully LZ2KAC be heard on HF bands. 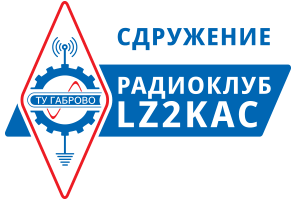